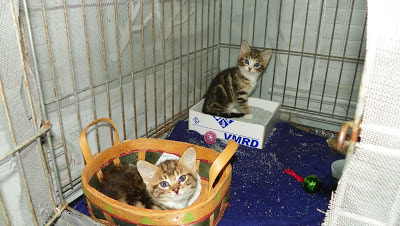 Hello everyone, I'd like you to meet the two newest additions to our little broke family:  Bob & Leon.  Or I could call them Cautious and Curious.  (Leon is very skittish and cautious, while Bob is into everything and wants all the attention) We have never considered ourselves 'cat people' but since getting these guys we are totally smitten with these kittens!  [Ha!  I made a rhyme!]  Anyway, we decided we needed a cat because we were having problems with mice and we also have squirrels, rabbits, and chipmunks outside that eat all my flowers (arrg...).

After more investigating we decided we couldn't just get one cat because it would need a friend to play with.  We went back and forth trying to decide and then Daniel's sister called us one day and said that she had a friend with 2 kitties who needed a home.  That sealed the deal.  She brought them down and they've been entertaining us ever since. 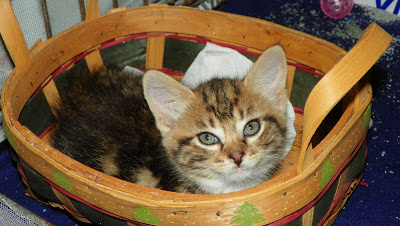 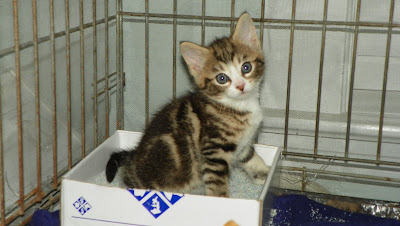 How did we come up with those excellent names, you ask?  Well, Daniel liked Leon because it was like Leo/Lion and Leon's look and personality is like a little wild cat stalking around and hiding in the shadows before he pounces on his prey.  I think he'll be the hunter.  It was a little harder coming up with the second name, we went through a few before we settled on Bob.  I was thinking of actual cat breed names and I thought of a bobcat... and so that's where that originated.  But then I noticed the coolest thing.  Bob's markings actually say "BOB" so it seemed it was meant to be.  It was like he was born with his name printed on his side.

Here's a better picture where you can see  how his side spells out "BOB": 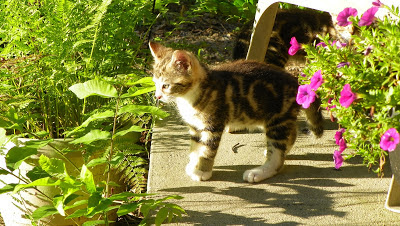 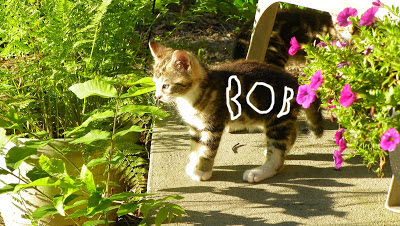 It's a lot more noticeable in person.

The original plan was to have them outside but the day we got them we had horrible thunderstorms with torrential rains that lasted for about a week.  We didn't have anywhere dry outside where they could stay, and they were so little and cute, so we kept them in their cage in the laundry room for a few days and would let them out to play when we got home.  They hated going back in the cage after getting to play (understandably) and would cry and cry, so I felt bad and started letting them pretty much have the run of the house while we were at work.  (Yes, I realize this means that they have officially trained me to do exactly what they want.) 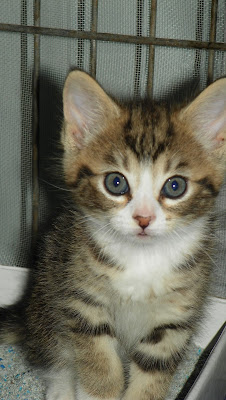 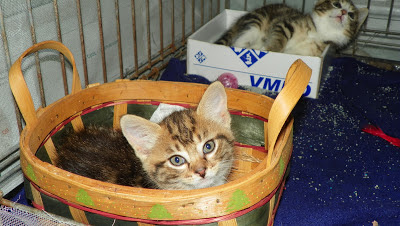 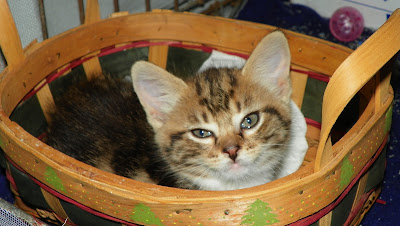 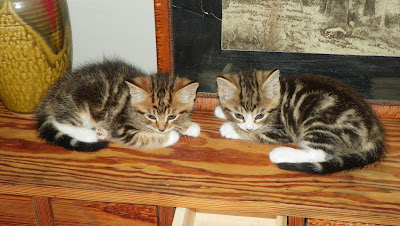 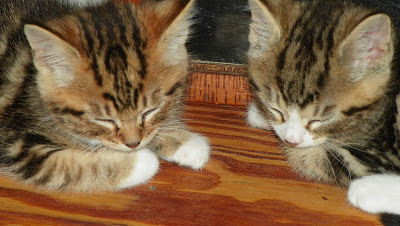 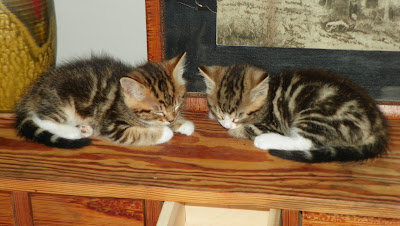 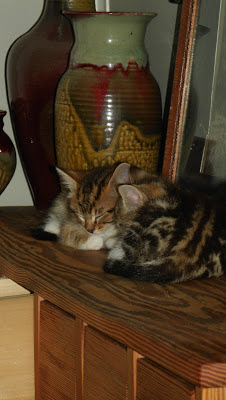 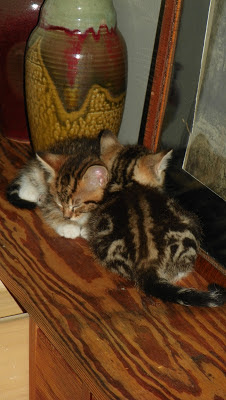 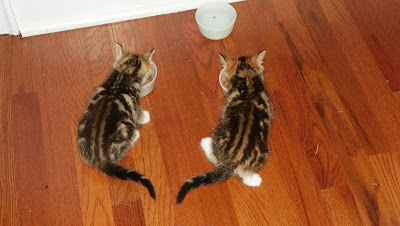 Unless you look at their faces, they're hard to tell apart because their markings are so similar.

Once they get big enough for shots and flea/tick medicine, (and big enough not to get carried away by hawks) we're gonna try to get them used to being outside.  They've already gotten noticeably bigger in the last week.  We've let them hang out with us outside a few times but they're still pretty wary of the great outdoors and don't like to stray too far from the front door.

This is Bob, he jumped up and managed to claw his way halfway up the door mewing loudly as if to say, "LET ME BACK IN!  I DON'T LIKE IT OUT HERE!  THERE'S NO PILLOW!  AND NO AIR CONDITIONING!" 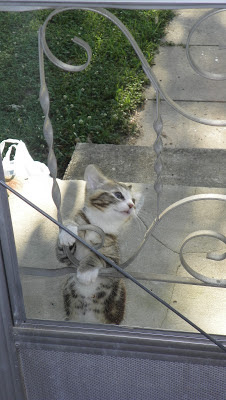 Once they were out there for a few minutes, they got over their fear and started exploring. 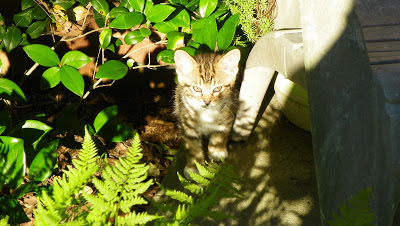 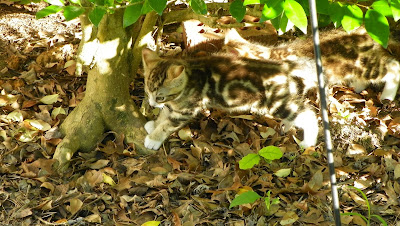 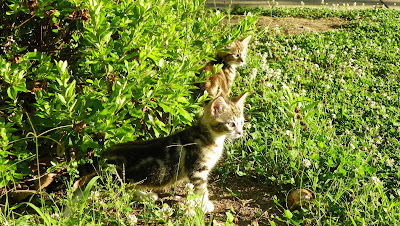 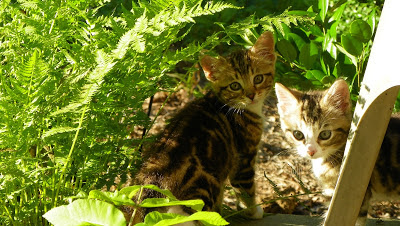 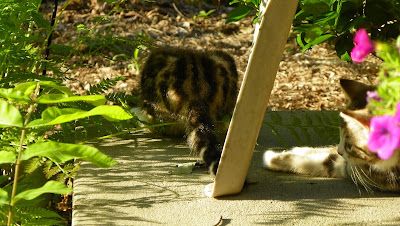 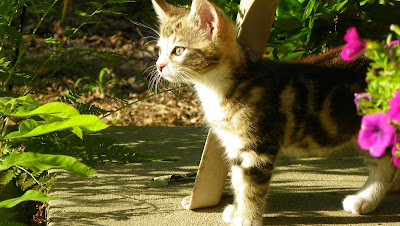 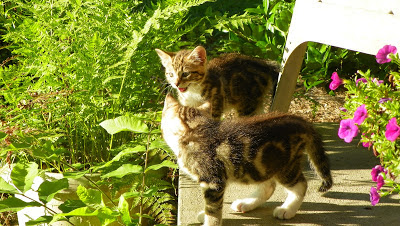 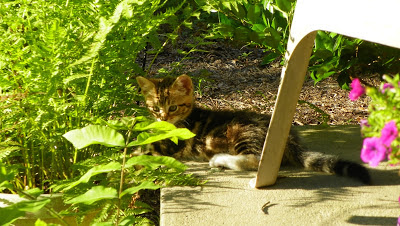 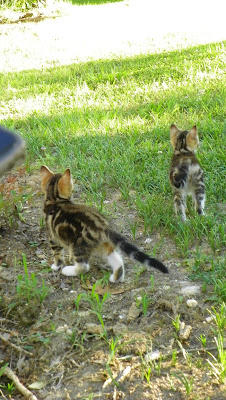 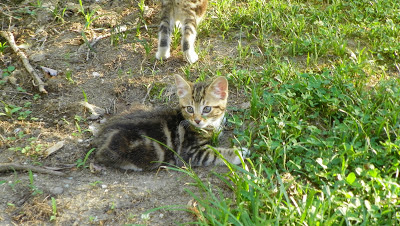 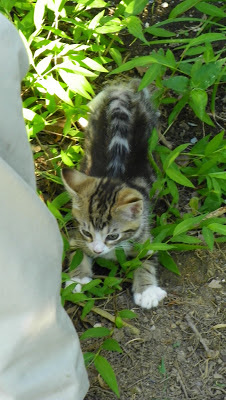 They were glad to come back inside and be lazy kitties. 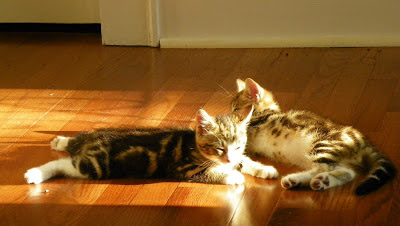 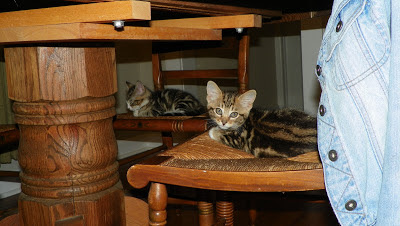 They're getting much more destructive adventurous the bigger they get and I noticed last night that they've managed to claw my curtains to shreds and tear up the dining room chairs with their little kittie claws (grrr).  It's hard to be mad at them since they're so cute and cuddly, but I think I'll be happier once they're bigger and they can live outside and start (as Daniel likes to say) unleashing carnage on our mouse population.  AND we won't have to deal with emptying a litter box... I most definitely won't miss that.

They certainly have distinct personalities and they have managed to become a part of our family right from the very beginning.  They're so fun to watch as they pounce and tackle each other.  We spend lots of nights just sitting around watching them play because they can be so hilarious.  (I know, sounds exciting, right?)

Could we be turning into crazy cat people?